“You won’t believe this!” your friend calls out from just a few yards away. 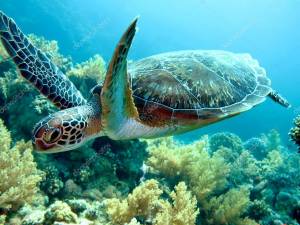 Like you, she is thigh deep in the crystal blue shallows at Poipu Beach, in that cozy little cove on the south side. The sunshine is wide and the sea is dotted with scattered swimmers on this random Tuesday. “Don’t rush over,” she says, dipping her GoPro into the water, “. . . but get over here!” She laughs softly, “It’s a sea turtle!”

As she utters the words “sea turtle” it’s as though some divine sound wave has filled the ears of every person within a quarter-mile radius. Swimmers start to glide over, parents and kids wade in closer, tourists wander up from Brennecke’s, you swear people have been lowered in by helicopter. Your friend could have trumpeted, “It’s Kate the Duchess of Cambridge doing the backstroke!” and received a less interested response from onlookers.

Luckily everyone seems respectful, hoping for a glimpse of ocean royalty without disturbing him. You see a dark turtle-ish shape underwater turn and push at the rocks. As he gently glides into deeper waters, a flotilla of snorkelers who seem to have materialized out of nowhere now float into the space above him. Your friend is beyond thrilled about her encounter and swears he was smiling right at her. “I’m naming him Sheldon,” she emotes.

And this — just your first day on Kauai!

What is it about sea turtles?

Sea turtles, or “honu” (hoh-noo) to the locals, topmost travelers’ wish lists of wildlife to see in Kauai. The creatures’ kind faces and trudging gait are endearing, and to watch them swim is a joy.

But it’s also their will that amazes us. A newly hatched sea turtle’s chance of dodging predators as it scrambles from its sandy nest to the relative safety of the water is one of the most harrowing starts to life in the animal kingdom. Even then, hatchlings are a favorite snack of sea creatures, and only one in 1,000 eggs will survive to adulthood. If a turtle beats the odds, however, they can live up to 80-plus years!

Perhaps it’s their scrappy courage that earns sea turtles a special place in our hearts.

Before your week at Koloa Landing Resort is up, you will see three more sea turtles: While snorkeling in the waters of Koloa Landing, you’ll freeze mid-stroke and tread water as one flies right past you through the remarkably clear water — flippers flapping like wings, breaking the surface for a quick breath before disappearing into the depths. Stunning!

On the last day of your trip, the resort’s concierge will book you on a catamaran up the Napali Coast, where off the side a few yards out you’ll get to watch (though slightly apologetically next to 20 adventurers with iPhones raised) as two sea turtle engage in a floaty, floppy mating ritual. The boat captain tells you how lucky you are at this rare sighting.

You feel lucky indeed . . . and find yourself rooting for their baby turtles already.

The best sea turtle sighting spots on the South Shore:

The concierge team at Koloa Landing Resort is ready to help. Visit one of our poolside Activity Huts for snorkel gear and seasonal recommendations.