Local Wildlife to See on Your Kauai Beach Resort Vacation

Local Wildlife to See on Your Kauai Beach Resort Vacation

If you’re a nature-lover, the island of Kauai is a paradise filled with diverse flora and fauna. While all the Hawaiian islands are renowned for their wide array of wildlife, Kauai being the oldest island is particularly esteemed for having a lush ecosystem that enables wildlife to thrive.

Unique Animals Found Only in Hawaii

Many endemic species, meaning wildlife that exists only in one place in the world, are found in the Hawaiian Islands. Hawaii’s remote location in the Pacific Ocean has contributed to the large number of endemic species found here. Two of the most notable endemic mammals are the hoary bat and the Hawaiian monk seal.

The hoary bat is now an endangered species attributed to deforestation of their natural habitat and the use of harmful pesticides. The nocturnal mammals are distinguishable by their brown or gray fur with white tips. These bats are solitary creatures and are rarely seen. Kauai and the Big Island are two places these bats commonly live. If you’re lucky, you may catch a glimpse of the hoary bat at dusk near coasts and other natural bodies of water feeding.

The Hawaiian monk seal was once almost on the brink of extinction for its skin and oil, but has now repopulated but remains on the endangered species list. You can sometimes spot these beautiful creatures along Kauai’s south shore on Poipu Beach. May is birthing season. You may be lucky to catch a glimpse of a sunbathing pup!

Because the hoary bat and the Hawaiian monk seal are endangered, it’s important to protect these endemic species by staying away and not feeding them.

Kauai is for the Birds

Birders are in for a treat as Kauai is an island well-known for being a bird sanctuary. Home to over 80 different bird species, 21 of these are endemic to Kauai. The state bird of Hawaii is the nene, a medium-sized goose characterized with diagonal stripes on its neck.

A few good bird-watching locations on Kauai are Hanalei National Wildlife Refuge and Kokee State Park. A few types of birds you may see are:

Wildlife Under the Sea

The Hawaiian oceans are home to three species of endangered sea turtles which can be spotted along Kauai’s shorelines. Humpback whales can be seen through one of the many whale watching expeditions, one of the offered Kauai activities. Going snorkeling near the reefs is a great way to check out the coral and the many species of sea creatures that live there such as butterfly fish, conger eels, parrotfish, wrasses, and surgeonfish. Beware of the scorpion fish with its venomous spines.

For advice on the best places to spot wildlife, or to book a once-in-a-lifetime resort experience, speak to one of the members of our knowledgeable team and contact us today. 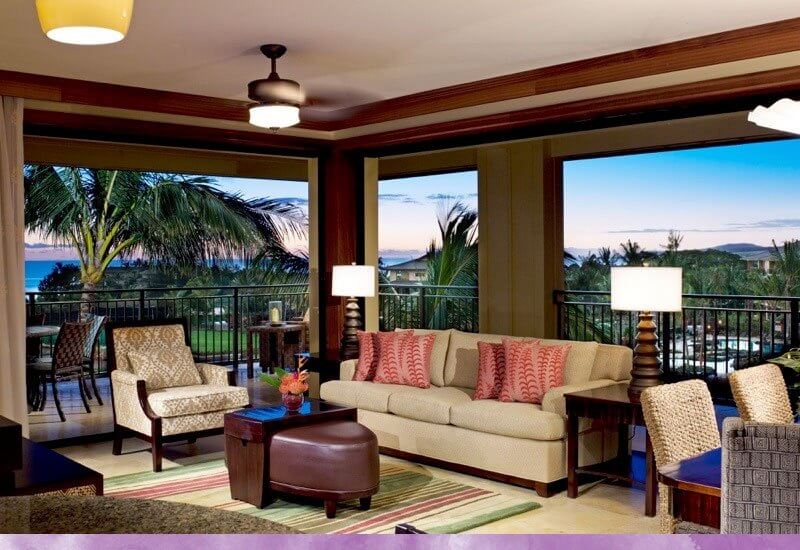