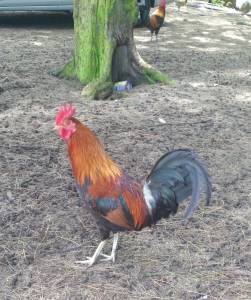 2017 is officially the Year of the Rooster — the perfect time to tell the story of these colorful feathered locals . . .

You’ve just arrived on Kauai’s tropical South Shore and are steering your rented Jeep up the drive to Koloa Landing Resort — eager to check into your villa for the week. Something darts out of the tall grass, and you hit the brakes to avoid it. You lean over the steering wheel to watch, amused, as a mother hen and her trail of four fuzzy chicks cross the road right in front of you.

Here on Kauai, the answer to this age-old question is simple because chickens are everywhere! They cross everything! They also roam parking lots, hang out by pools, wander restaurant patios, crow under coconut trees, and at this point, some of them have probably even learned how to surf and mix a mai tai. (But, not at the same time because that would be weird.)

In short, Kauai is no place to be chicken of chickens.

Worldwide, chickens outnumber humans about three to one, but around the Garden Isle, the number feels like much more. Some say there is such a proliferation that Kauaians no longer even bother to count their chickens.

So where did all these feral feathered friends come from? And for a place whose state fish is the oh-so-fancy-sounding humuhumunukunukuāpuaʻa, how is it that the most prevalent bird here is a free-range, garden-variety hen?

Where Did Kauai Chickens Come From?

Different theories have hatched over the years, but most locals will tell you that in 1982 Hurricane Iwa hit the Hawaiian Islands, battering Kauai most severely. Fierce winds blew countless chickens out of farms and scattered them across the island. Unattended, the chickens began to multiply like rabbits. Ten years later, Hurricane Iniki’s winds flung them even further and wider.

For a flightless bird, the Kauai chicken sure has had its share of air travel. 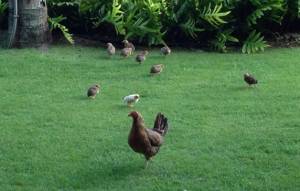 Another theory says that Kauai was the only one of the Hawaiian Islands not to release an army of mongoose into the wild in 1883 to control rats in the sugarcane fields. The Indian mongoose also fed on chicken eggs, which naturally meant fewer chickens. Kauai was apparently lowest on the pecking order of the mongoose project and to this day roosters and hens enjoy life here with few predators. Even the locals don’t bother eating them as their meat is notoriously tough and less tasty than that of the fat broilers raised elsewhere for arroz con pollo and chicken nuggets. As for their eggs, well, they lay an egg in the taste department too.

The chickens — or “moa” in Hawaiian — are also left to live and let live because a state law prohibits harming them in any way. Perhaps this is why they act a little cocky. And though some complain the Kauai roosters’ early morning alarm clucks (aka “shaka doodle doos”) can be annoying, most folks enjoy the quirky presence of these beautiful birds. 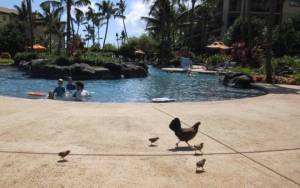 So just why did the chicken cross the road? Around here, it was probably for the same reason you did: to get a better look at the glorious South Shore coastline where all creatures are meant to live in harmony — and where life is always sunny side up.